Shakespeare Sonnet 9, Is it for fear to wet a widow’s eye 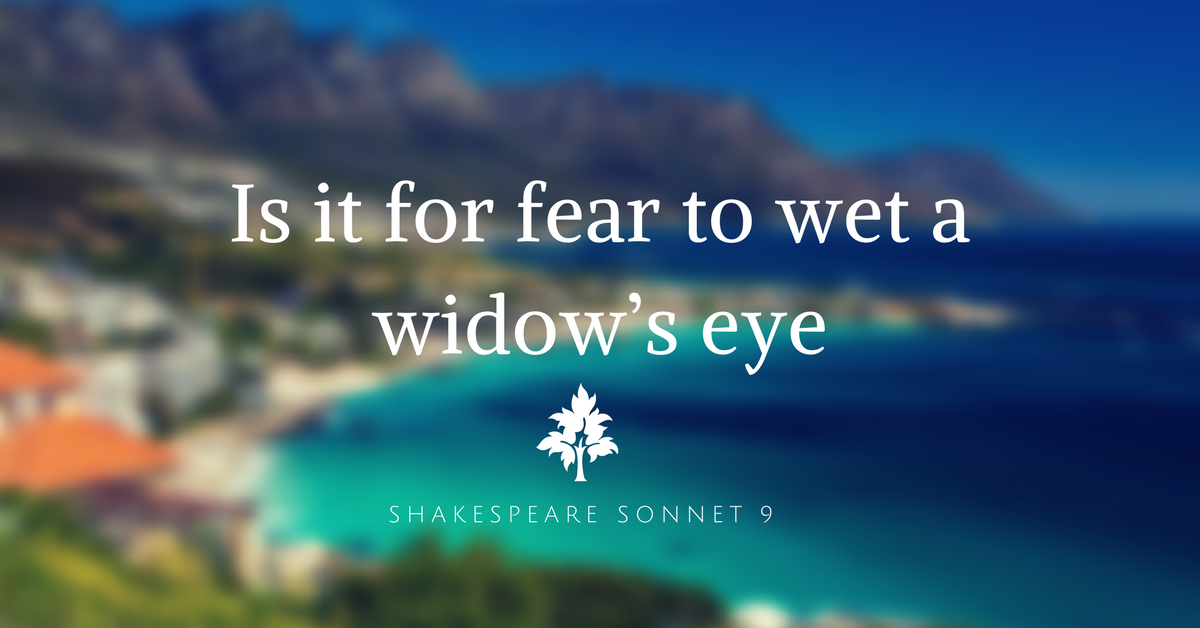 Is it for fear to wet a widow’s eye
That thou consum’st thyself in single life?
Ah, if thou issueless shalt hap to die,
The world will wail thee like a makeless wife;
The world will be thy widow and still weep,
That thou no form of thee hast left behind,
When every private widow well may keep,
By children’s eyes, her husband’s shape in mind.
Look what an unthrift in the world doth spend
Shifts but his place, for still the world enjoys it;
But beauty’s waste hath in the world an end,
And kept unused, the user so destroys it.
No love toward others in that bosom sits
That on himself such murd’rous shame commits.

Continuing with the theme of procreation in Sonnet 9, Shakespeare addresses man asking if he is remaining single for fear “Is it for fear” of leaving a grieving widow “wet a widow’s eye”. By dying single without a child, “if thou issueless” the world instead will mourn the loss “world will wail thee” like a grieving widow. like a makeless wife;”

Shakespeare reminds man that by being childless, it is the world who will mourn the loss like a widow “The world will be thy widow”. He says that each times a widow “every private looks into their children’s eyes, “By children’s eyes”, they will be reminded of their husband’s memory. “her husband’s shape in mind”

He says that even a wasteful person’s money when spent “unthrift in the world doth spend” is always transferred from one person to another “still the world enjoys it;“. But the beauty of life has an end. “Beauty’s waste…..in the world an end” By not using his ability to have children, “kept unused” the beauty of a man’s name is destroyed in death. “user so destroys it.”

By not bearing children, Shakespeare says a man is a loveless person “No love toward others” and that dying childless is a shameful thing “murd’rous shame commits.“