Shakespeare Sonnet 74 Analysis, But be contented when that fell arrest

But be contented when that fell arrest
Without all bail shall carry me away;
My life hath in this line some interest,
Which for memorial still with thee shall stay.
When thou reviewest this, thou dost review
The very part was consecrate to thee.
The earth can have but earth, which is his due;
My spirit is thine, the better part of me.
So then thou hast but lost the dregs of life,
The prey of worms, my body being dead,
The coward conquest of a wretch’s knife,
Too base of thee to be rememb’red.
The worth of that is that which it contains,
And that is this, and this with thee remains.
–WIKI 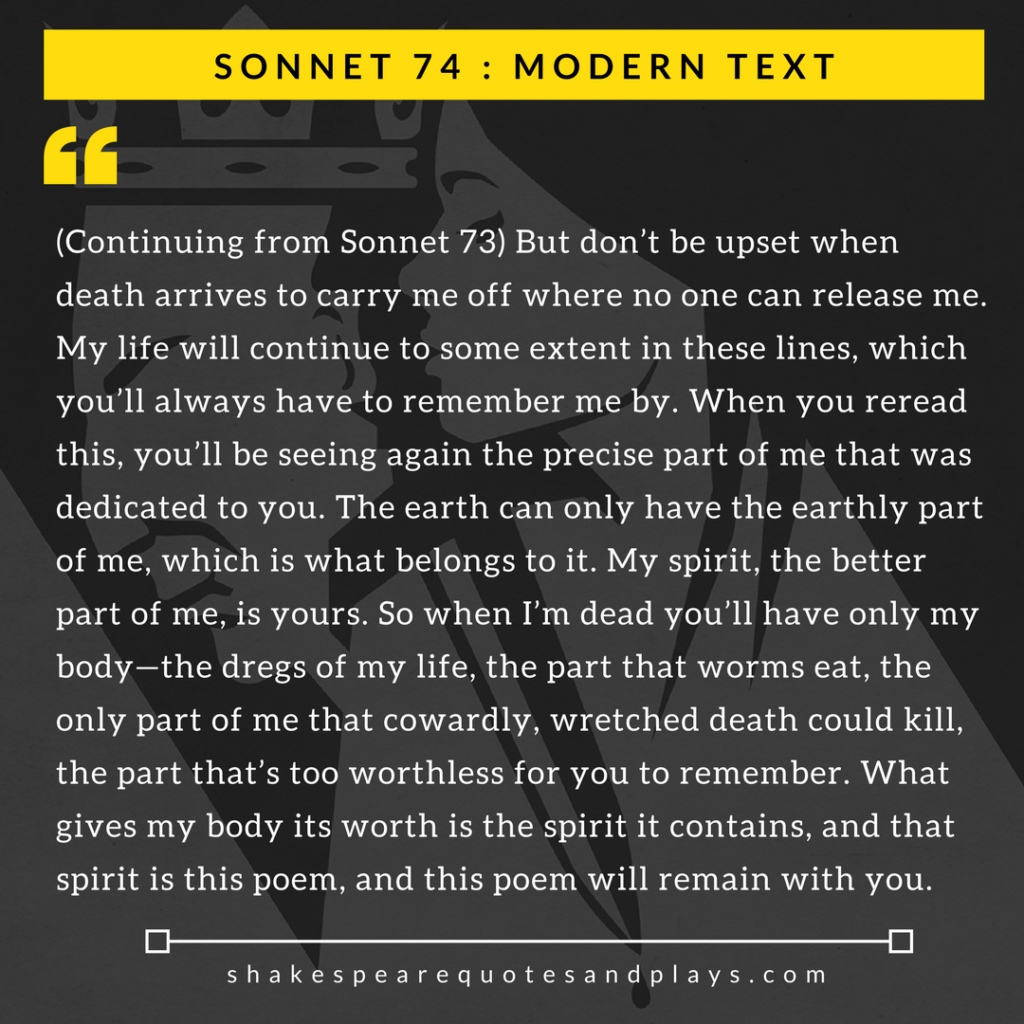 In continuation of sonnet 73, Shakespeare tells the fair youth not to be upset “But be contented when that fell arrest” when death comes to take him away “shall carry me away” to the place where he can’t be released, his life instead will be remembered in these lines of poetry “My life hath in this line some interest, “that like a memorial will stay with the youth “Which for memorial still with thee shall stay.”

When the youth reads the poems, “When thou reviewest this” he will see the part “thou dost review “that the poet has dedicated to him. “The earth will have his body which is returned back to earth “The earth can have but earth” but the poet’s spirit belongs to the youth which is the best part of him “My spirit is thine, the better part of me.”

Once the poet is dead, he tells the youth that it is the only aspect of his life “So then thou hast but lost” that death could kill, or worms could eat “the prey of worms, my body being dead,”

referring to his physical form which might end up being killed by a coward “coward conquest of a wretch’s knife,” and which he tells the youth is useless to remember “Too base of thee to be remembered.”

What he wants him to remember is the thing that is important “The worth of that is that which it contains,” and that is his spirit which lives on in the poem which will remain forever with the youth “And that is this, and this with thee remains.”