Shakespeare Sonnet 73 theme, That time of year thou mayst in me behold That time of year thou mayst in me behold
When yellow leaves, or none, or few, do hang
Upon those boughs which shake against the cold,
Bare ruined choirs, where late the sweet birds sang.
In me thou seest the twilight of such day
As after sunset fadeth in the west,
Which by and by black night doth take away,
Death’s second self, that seals up all in rest.
In me thou seest the glowing of such fire
That on the ashes of his youth doth lie,
As the deathbed whereon it must expire
Consumed with that which it was nourished by.
This thou perceiv’st, which makes thy love more strong,
To love that well which thou must leave ere long.
–WIKI 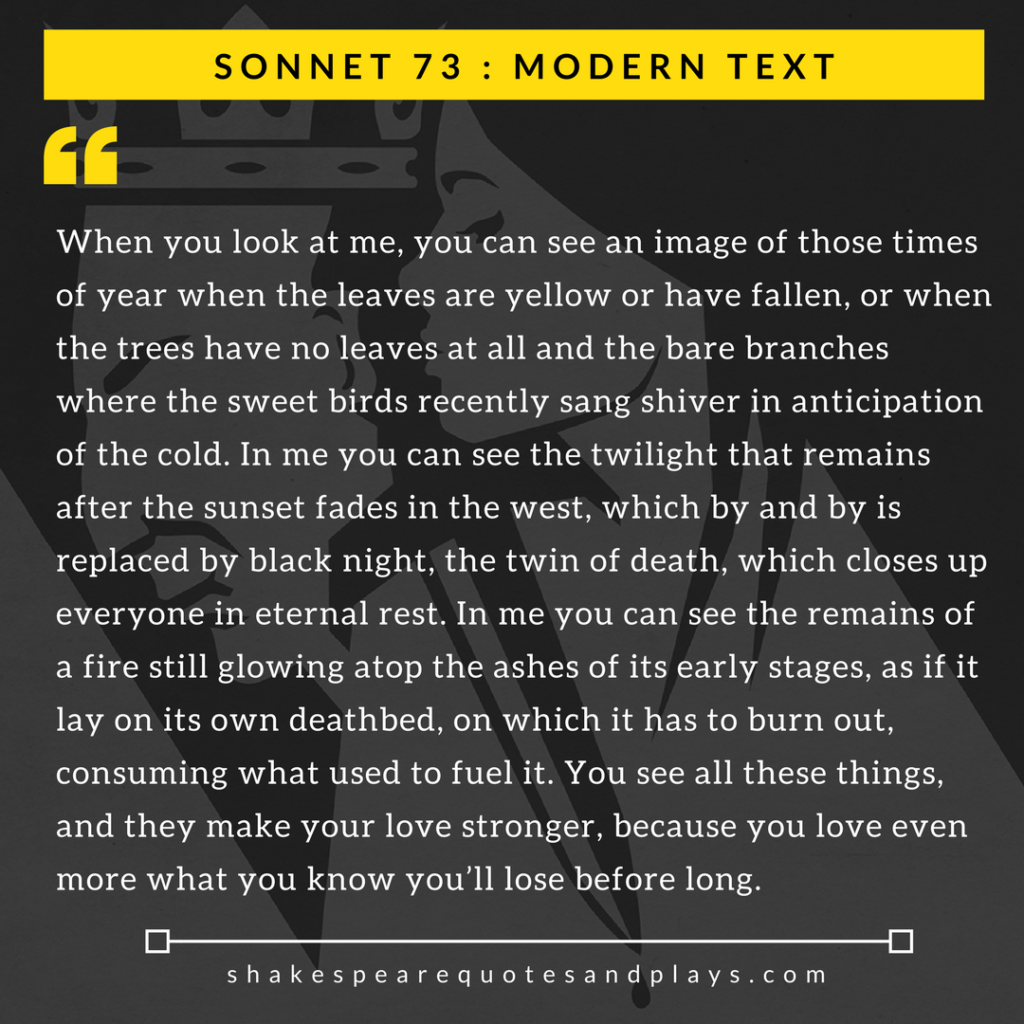 The poet tells the fair youth that when the youth looks at him, he will see an image of autumn or mellowing years “That time of year thou mayst in me behold” which is a time when leaves are yellow “When yellow leaves” or trees have no leaves at all none, “or few, do hang” with boughs “Upon those boughs” that are affected by the cold weather “which shake against the cold” and bare branches exist where birds once sang.

In the image of the poet,” In me thou seest” you will see the time of twilight “the twilight of such day “that is the time when the sun fades into the west “after sunset fadeth in the west” and is then substituted by dark night “black night doth take away” which is the twin face of death “Death’s second self” that makes everyone be entombed in eternal rest “that seals up all in rest.”

In the poet, the youth will see the remains of a glowing fire “In me thou seest the glowing of such fire” burning on its previous ashes which the poet compares to youth. “On the ashes of his youth doth lie,”But which appears to lie on a deathbed “As the deathbed whereon it must expire “which will soon be required to burn out consuming its youth or the very same stage that kindled it “Consumed with that which it was nourished by.”

When the youth will see these things, “This thou perceiv’st” it will make his love stronger because he knows that which he loves “To love that well” will not last forever but die one day “which thou must leave ere long.”