Shakespeare Sonnet 50 Analysis, How heavy do I journey on the way This is a short summary of Shakespeare sonnet 50. Continue reading for complete analysis and meaning in the modern text. For the complete list of 154 sonnets, check the collection of Shakespeare Sonnets with analysis.

How heavy do I journey on the way
When what I seek (my weary travel’s end)
Doth teach that ease and that repose to say,
“Thus far the miles are measured from thy friend.”
The beast that bears me, tired with my woe,
Plods dully on to bear that weight in me,
As if by some instinct the wretch did know
His rider loved not speed, being made from thee.
The bloody spur cannot provoke him on
That sometimes anger thrusts into his hide,
Which heavily he answers with a groan,
More sharp to me than spurring to his side;
For that same groan doth put this in my mind:
My grief lies onward and my joy behind
WIKI 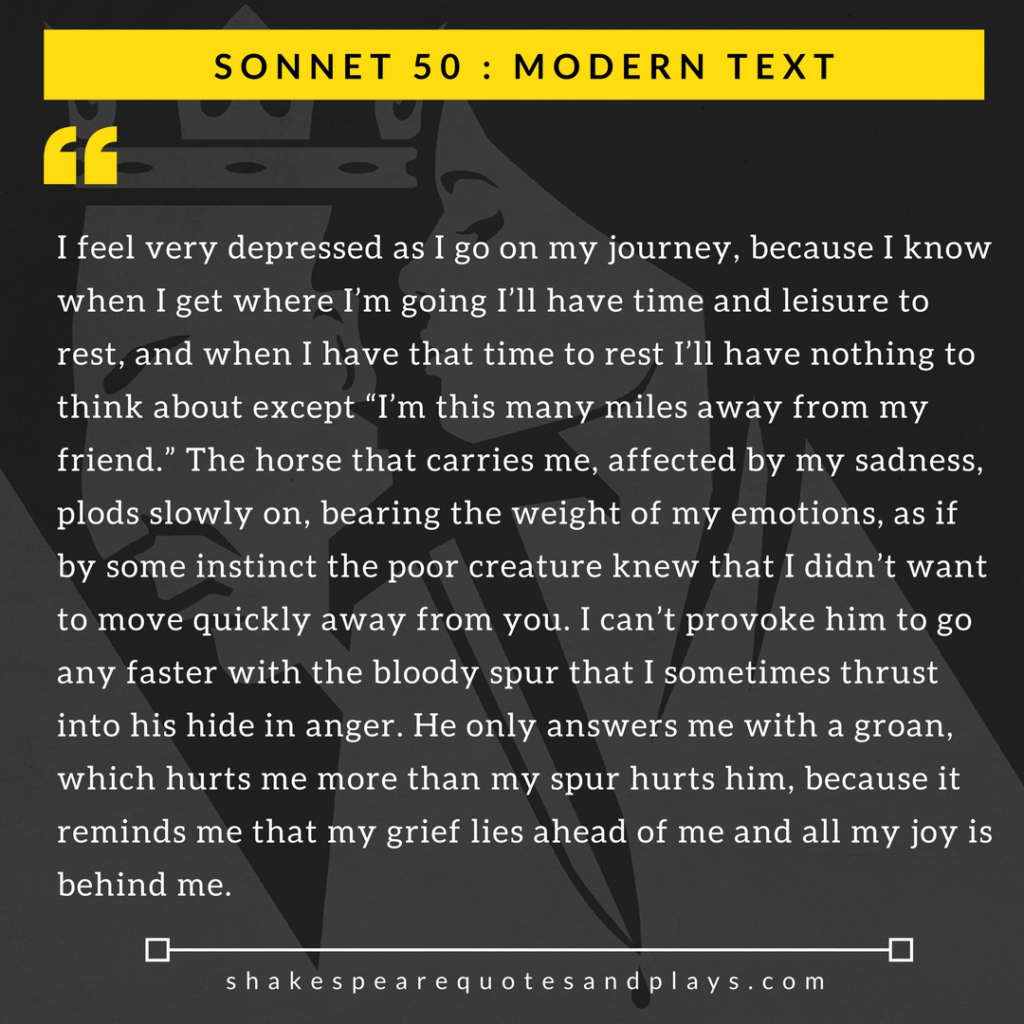 The poet says he feels extremely depressed and heavy-hearted “How heavy do I” during his journey “journey on the way”, because at the end of the journey “my weary travel’s end,” he will get time to rest but then he won’t be able to think about anything else “teach that ease and that repose” except that his friends are far from him “the miles are measured from thy friend!”

His horse carrying him “beast that bears” me is also very tired and affected by the poet’s depression “tired with my woe,” and burdened with such emotions moves slowly “Plods dully on” instinctive of the fact “instinct the wretch did know” that the poet may not want to travel fast “rider lov’d not speed” but slowly knowing that the poet doesn’t want to move away from his friend too quickly “being made from thee”

Even the spurs of a boot cannot make him go faster “bloody spur cannot provoke” which riders usually tend to do when angry with a slow-moving horse “anger thrusts into his hide,” to which the horse in pain usually emits a groan “answers with a groan”

The poet feels that the groan of the horse is more painful to him “More sharp to me” than the spur in the horses hide “than spurring to his side” that hurts the horse because it reminds him “groan doth put this in my mind” that he is moving further away from his friend leaving joy behind him “ grief lies onward, and my joy behind”