Shakespeare Sonnet 25, Let those who are in favor with their stars 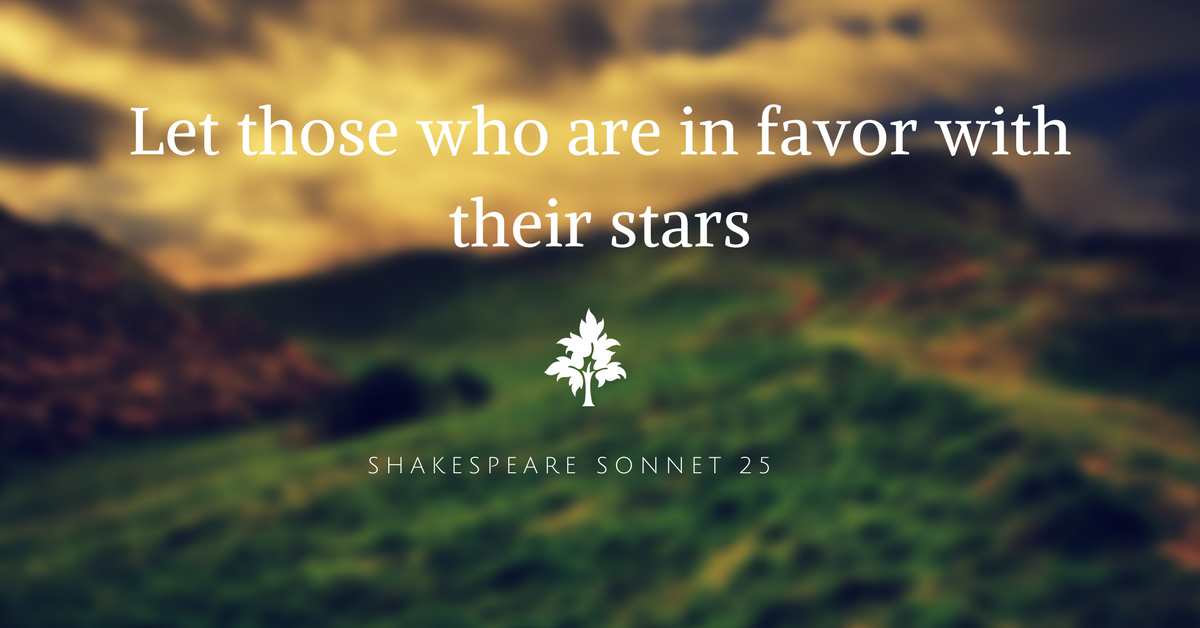 This is a short summary of Shakespeare sonnet 25. Continue reading for complete analysis and meaning in the modern text. For the complete list of 154 sonnets, check the collection of Shakespeare Sonnets with analysis.

Let those who are in favor with their stars
Of public honor and proud titles boast,
Whilst I, whom fortune of such triumph bars,
Unlooked for joy in that I honor most.
Great princes’ favorites their fair leaves spread
But as the marigold at the sun’s eye,
And in themselves their pride lies burièd,
For at a frown they in their glory die.
The painful warrior famousèd for worth,
After a thousand victories once foiled,
Is from the book of honor razèd quite,
And all the rest forgot for which he toiled.
Then happy I that love and am belovèd
Where I may not remove nor be removèd.
WIKI

The poet says Let those who are fortunate “favor with their stars”, and acquire public recognition and boast about their titles, “proud titles boast,” while he who isn’t lucky enough “I, whom fortune to achieve such things triumph bars,” is satisfied to experience the unexpected joy “Unlook’d for joy” in what he values the most “I honor most” and that is the youth’s love

He says courtiers of a prince “great princes’ favorites” are like marigolds with spread leaves “fair leaves spread.” He compares the prince or king to the sun saying as long as the prince smiles on them “marigold at the sun’s eye,” they swell with self pride “pride lies buried,” but the moment he frowns on them, “at a frown” their pride is killed “their glory die.”

He describes how a warrior who has painfully fought “painful warrior famoused” and won a thousand battles “thousand victories” if he is defeated once “once foil’d”, he is dishonored and stripped of his titles” book of honor razed quite,” and everybody will forget him “rest forgot” and his deeds for “which he toil’d”

But he the poet is happier that he loves “happy I, that love” and someone loves him “am beloved” where they both exist in each other’s hearts being something he cannot remove “ I may not remove” nor be removed.