Shakespeare Sonnet 13, O that you were yourself! But, love, you are 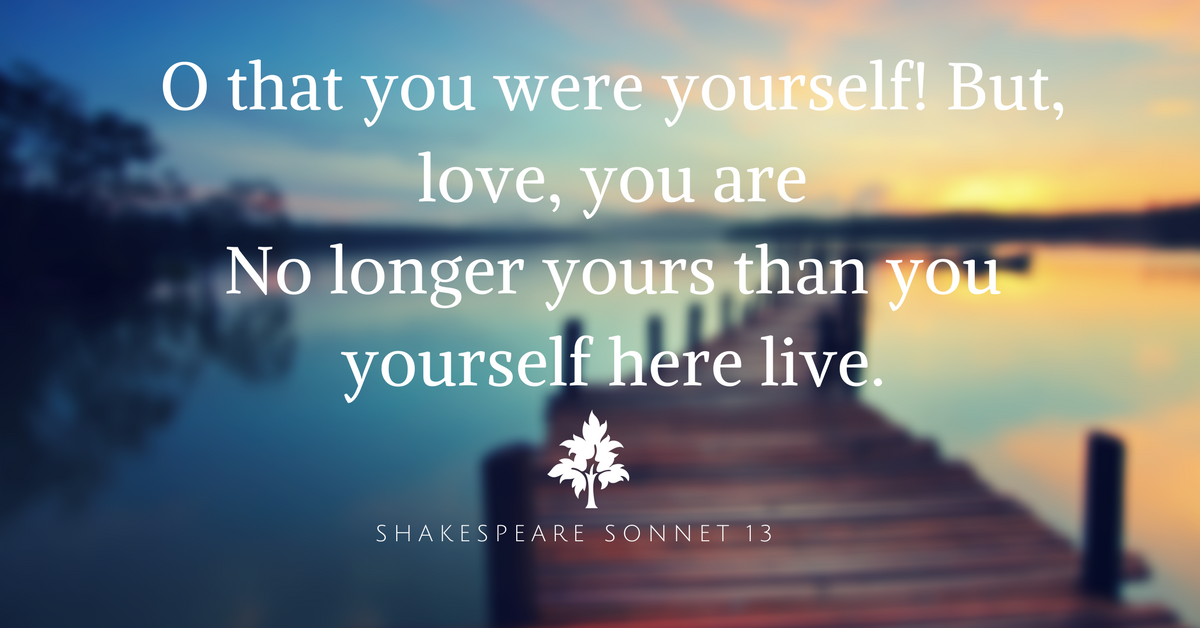 O that you were yourself! But, love, you are
No longer yours than you yourself here live.
Against this coming end you should prepare,
And your sweet semblance to some other give.
So should that beauty which you hold in lease
Find no determination; then you were
Yourself again after yourself’s decease,
When your sweet issue your sweet form should bear.
Who lets so fair a house fall to decay,
Which husbandry in honor might uphold
Against the stormy gusts of winter’s day
And barren rage of death’s eternal cold?
O, none but unthrifts, dear my love you know,
You had a father; let your son say so.

In Sonnet 13, Shakespeare addresses a youth saying if only he were in charge of his life, “that you were yourself” which he isn’t because his identity exists only till he lives “yourself here live”. Ultimately he must prepare for death “this coming end you should prepare,” and that he should have children in whom he will live on “your sweet semblance to some other give:”

He says that life is like nature’s lease “beauty which you hold in lease” but if he wants that lease to be unending, “ find no determination” then he should have children to carry on his name after his death “yourself again, after yourself’s decease”

Shakespeare compares a man’s lineage to a house asking what type of man would allow his house to be ruined “Who lets so fair a house to die fall to decay” when instead he can get children so that his house is maintained “in honour might uphold.” In this way a man escapes the destruction of his name for all eternity. “barren rage of death’s eternal cold”

In conclusion, he says, only irresponsible men “none but unthrifts” do not have children. If you were blessed with a father, then you too should get a son who can call you the same. “let your son say so.”