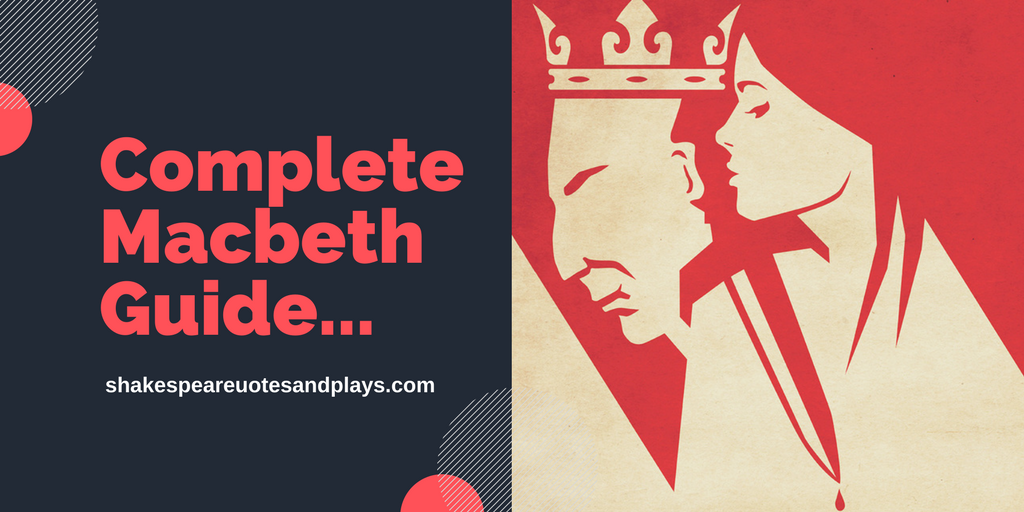 Macbeth is among the popular of all Shakespeare Plays. This Macbeth summary will help you understand the entire story of Macbeth, divided into five acts and several scenes.

Three witches with weird appearance enter the scene under the setting of lighting and thunder. This is a short scene, where the witches are having a conversation. They talk about ongoing war and anticipate the war to end in the evening. The hint about the major character of the play “Macbeth” in given in the scene. The witches planned to meet Macbeth, in an open field, when the war has ended. The sentences used by witches in the scene like “When shall we three meet again? In thunder, lightning, or in rain?“,  “When the battle’s lost and won“, “Fair is foul, and foul is fair” are significant in this scene. The audiences get an idea of a bloody war from ACT 1 Scene 1.

The scene introduces King Duncan, who got battlefield report from an injured Caption, who participated in the war. The injured Caption revealed that Macbeth courageously dealt with enemies who were no less in power. Macbeth fought with them bravely and killed Macdonwald. The troop was further attacked by Norwegian king, who was taken accordingly by brave Macbeth. Battlefield reports greatly satisfied the King, he was too happy with Macbeth’s bravery. Further, in the scene, King Duncan was informed by Ross that they won the battle against the traitor, thane of Cawdor and now he wants a treaty. Duncan orders his execution and decided to bestow the title “thane of Cawdor” to Macbeth. He asked Ross to deliver this news to Macbeth.

In this scene, the three witches again enter the stage and talks to each other. They talk about killing pigs and revenging a sailor, whose wife declined her a chestnut. Suddenly the drum sound is heard and Macbeth accompanied with Banquo enters the scene and they encountered the weird looking witches. Banquo reacts “who are these weird looking creatures, who doesn’t look like inhabitant of earth”

What are these
So withered and so wild in their attire,
That look not like th’ inhabitants o’ th’ Earth,
And yet are on ’t?

Banquo and Macbeth questioned the witches of their identity, and witches greeted Macbeth as “thane of Glamis”, “thane of Cawdor” and “future king” which shocked Macbeth because “thane of Cawdor” is still alive and its just impossible for him to become “future king”. The Witches further reveals to Banquo that he will never become the king, but his children will become one, he won’t be as happy Macbeth, yet much happier, he won’t be as greater as Macbeth, yet much greater. Macbeth wanted to know more about the predictions made by witches, but they vanished leaving Macbeth and Banquo in the state of shock and confusion. ROSS and ANGUS enter the scene with the message of King Duncan. They revealed to Macbeth and Banquo that King Duncan is happy and proud with the great deeds of Macbeth, who fought the battle courageously without any fear of death. Rewards and honors await him. They further revealed that King asked them to call Macbeth as “thane of Cawdor”. This shocked Macbeth and Banquo because the witches predicted the same.

What, can the devil speak true? – BANQUO

Macbeth in the state of confusion asked them, how can he acquire the title when thane of Cawdor is still alive.  ANGUS replied that the present thane of Cawdor will be executed because of his treason. The scene further moves and shows the confusion and fear in the mind of Macbeth. He is appalled with the predictions made by Witches, which turned out to be true. The third prediction made by witches, that he will be the future king, left the mind of Macbeth full of strange and weird feelings.

The scene starts with the setting of sounds of trumpets. King Duncan with his sons and attendants enters. King Duncan is curious to know about the execution of former thane of Cawdor. Malcolm informs him that he died after confessing his guilt, with great repent and was seeking forgiveness. Macbeth, Banquo, Ross and Angus enters the scene. King Duncan is delighted upon seeing Macbeth and Banquo and thanked them for their heroic deeds. In this scene, King Duncan also showed his intent to make Malcolm, his legal heir. Although Macbeth showed his agreement with great joy, but now he sees Malcolm as someone, in between him and throne. Duncan planned to dine at Macbeth’s castle, in order to show his gratitude to brave heart. Macbeth left ahead of King, in order to inform his wife and do preparations for King’s arrival.

The scene is set in Macbeth’s castle, where his wife, Lady Macbeth is a reading a letter. The letter is by Macbeth himself, where he wrote everything that transpired. His meeting with witches, their predictions, how their prophecy of “thane of Cawdor” turns out to be true, his fate to become future king etc. In this scene, we get an idea of Lady Macbeth’s character. She doubts that her husband doesn’t possess the aggression to capture the crown. He is full of kindness. Though he wants to achieve things that do not belong to him, yet he wants to do it like a good man. Lady Macbeth plans to settle things when Macbeth is back home, she will convince him to take further steps in the direction to capture the throne. A servant enters and announces that the king is on his way towards the castle and Macbeth is coming ahead of him. Lady Macbeth, while waiting for her husband delivers her evil speech.

Come, you spirits
That tend on mortal thoughts, unsex me here,
And fill me from the crown to the toe top-full
Of direst cruelty. Make thick my blood.
Stop up the access and passage to remorse

She wants to become more like a man than a woman to achieve her cruel deeds. She asks spirits to fill her up with cruelty. Upon Macbeth’s arrival, she greeted her and started manipulating him.

King Duncan, along with his sons, lords, and attendants arrives at Macbeth’s castle. King Duncan is very pleased with the serene atmosphere of the castle. Lady Macbeth enters the scene to welcome and greet the guests. King Duncan is very happy to see the hospitality of the people he loves. Lady Macbeth declares that it is their duty toward the king and it is nothing when compared with the honors and rewards that King has bestowed upon her family.

The scene is set in Macbeth’s castle where servants are working with the preparations for the feast. We can see the inner turmoil inside Macbeth, who is thinking deeply about the idea of murdering King. We can see his mind twisting between “YES” and “NO”. He is not sure weather, murdering the King is the right idea, because according to him violence only teaches violence and it comes back to us some day or the other. He acknowledges that King Duncan is a humble man, free from any sort of corruption and it is his duty to protect him rather than killing him. The only thing which is driving the thought of murder was the ambition to become king himself. Lady Macbeth enters and Macbeth speaks his mind. He said that he can’t carry on with the plan of murdering the king. Lady Macbeth contradicted him with stern words, calling him coward, weak and described his act as unmanly. Macbeth feared the idea of failing in his mission, but Lady Macbeth encouraged him saying that they can’t fail and asked him to be courageous. We can see the way Lady Macbeth convinced and manipulated Macbeth in this scene. Macbeth confirms that he won’t give up with his ambition and will commit the crime of murdering King Duncan.