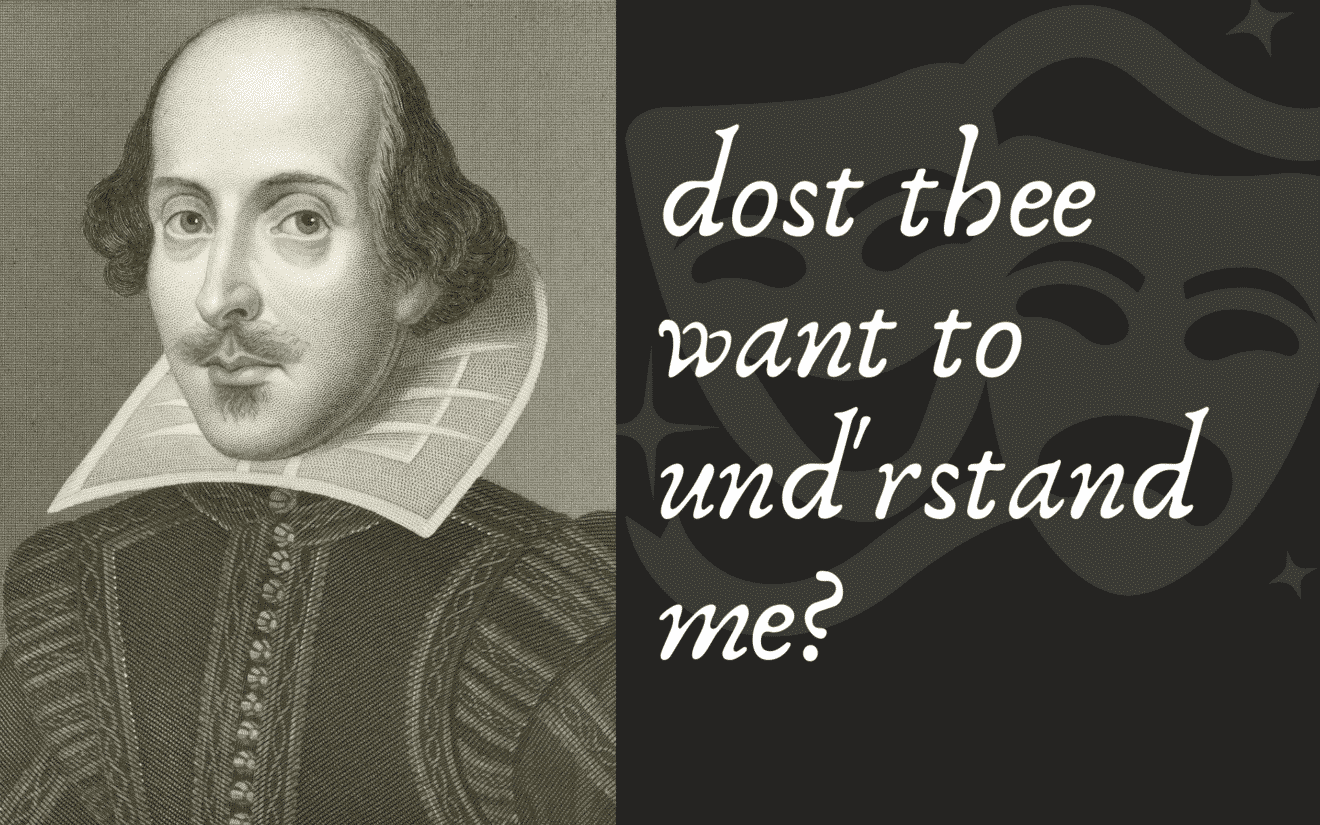 What terrifies students are not Shakespeare plays or sonnets, it is the bizarre Shakespeare words and phrases that threatens them. This article is the end of all your sufferings.

Words are a pretext. It is the inner bond that draws one person to another, not words.

You use Shakespeare vocabulary in your day to day life than anything else. You don’t think so? Ok, then you are not “blindly in love” with Shakespeare. I am doing a “baseless” argument.

It is not just you who struggled in understanding Shakespeare usage of words and phrases. Almost everyone who reads him undergoes the same traumatic experience. The Shakespearephobia increases when they realize that its not a new language. Its simply “English”. Even a good performer struggles with bizarre Shakespeare vocabulary.

Understanding Shakespeare’s words and phrases and adjusting to his vocabulary is not like learning a new language. It is like reading a strong accent and in a few hours, you will adjust to the new dialect accordingly.

Let me ask you a question! What do you think is the meaning of “methinks”? If you got it right, then yes! within a few hours of reading Shakespeare, you will be comfortable in understanding Shakespeare.

Even if you do not understand every word, but you will get the meaning from the context or visual action of the actor if you are watching the performance.

This article is divided into 3 parts.

I am going to share three magical tips given by my teacher when I was in University. It helped me a lot to understand Shakespeare Vocabulary fast.

2: How Shakespeare Words are different

If you are fascinated to see the difference between English we use today and English used in Shakespeare Plays, then this is the place to read.

Thee and Thou means “you” Thy and Thine means “yours”

Thee, thou, thy and thine were a more casual, friendly or intimate way of talking, while you and your were a more polite & formal way of talking. So, if a friend, brother or a colleague is referred, the former is used and on formal occasions later is used.

Just like thee, thou, thy and thine, “art” is an intimate expression of saying “are”. So if you encounter a sentence “Thou art”, it means “You are”.

“Ay” means “Yes”, So “Ay, My Master” will mean “Yes, My Master”. Just like thee, thou, thy and thine, both “Art and Ay” are very commonly used expressions in Shakespeare Plays.

You are going to encounter the words given below very often in Shakespeare Plays. Knowing what these words mean will make your life easy.

Some other commonly used Words in Shakespeare Plays and what actually he meant:

On many occasions, you will notice that a common English word ends with -eth or -est in Shakespeare works. For instance “Speaketh“, “Sayeth“, “thinketh” etc for Speak, Say, Think respectively. There were similar words ending with -est like “Speakest“, “Sayest”, “Thinkest“. These were the common grammatical expressions. Check the table below:

Soon after Shakespeare’s time “thee/thou/thy” fell out of use, naturally – Est was dropped. -Eth was replaced by English -s or -es.

Absence of Don’t, Do and Did

Words we commonly use today like “don’t” “do” and “did” were unfamiliar to people in Shakespeare’s time. This is one of the reasons why Shakespearean English appears difficult at first glance. The sentence formation without using “don’t, do and did” appear weird to beginners.

Below are some common English sentences and its Shakespearean translation:

Combining such sentence formation with unfamiliar expressions of thee, thou, thy, thine and old grammatical rule of -eth/ -est is bound to confuse beginners.

Shakespeare not just invented words for invention shake, he played with them. Most of the Shakespeare words and phrases are so expressive that it is just impossible to not use those it in a particular situation or context. If I get a good result after having lots of distractions, it just becomes imperative to say “All’s well that ends well“.

If you will research on the number of words invented by Shakespeare, the exact number that you will get is “1700”. Do not get misled by the numbers. It is true that Shakespeare is identified as the first time user of many words. But it is also true that many of those words were known to people in Elizabethan society. Otherwise, the audience in Elizabethan theatre would never have understood many words in the play and would have missed the entire plot.

Shakespeare was the first person who used those words in a written format. Just because Shakespeare was first documented user of many words, it is conveniently attributed to him. But that does not mean he did not create any word. He definitely created many words which are colloquially used today. Below is the list of 60 words, which is most certainly invented by Shakespeare himself.

Shakespeare invented words by adding prefixes and suffixes to existing words, conjoining two words, changing verbs into adjectives and noun into verbs. And he did it in a most creative way. No one before Shakespeare has ever played so much with words. It is needless to say that Shakespeare genius is unparalleled.

One common question people will have is that, if reading Shakespeare is considered difficult today, how the contemporaries understood him clearly?

The answer to this is simple, the words invented by Shakespeare were based upon already existing words. Take the word “bedroom” for instance. It is the combination of two words “bed” and “room” and his creativity is in not saying it a “sleeproom”.

Shakespeare also invented completely new words as the vocabulary of English Language was growing in the Elizabethan era and the society was aware of this. This is how the Editor of the Oxford English Dictionary puts it:

The vocabulary of English expanded greatly during the early modern period. Writers were well aware of this and argued about it. Some were in favour of loanwords to express new concepts, especially from Latin. Others advocated the use of existing English words, or new compounds of them, for this purpose. Others advocated the revival of obsolete words and the adoption of regional dialect.

Shakespeare Vocabulary is believed to be more than 50000 words in which he used 31000+ words in works. Have a look at some of the words created and used by this literary genius in alphabetic order.

You may also refer to this mammoth list of 422 words invented by Shakespeare.

Shakespeare coined several phrases that have become part of our day to day conversations. These Shakespeare Phrases are so popular that it has been translated into many different languages and used as popular proverbs.

His wit and genius as a playwright are evident in his use of phrases, which are so appropriate to the context. Here is the list of 60 popular Shakespeare phrases in alphabetic order.

You may also refer to this huge list of proverbs coined by Shakespeare.

You also noticed the major difference between Shakespeare vocabulary and modern English vocabulary. This will eventually help you to read and understand commonly used terms in Shakespeare Plays and Sonnets. Making your study of Shakespeare more thorough and deep.

Sixty Words and Phrases invented by Shakespeare were shown so that you get an idea of how Shakespeare used to invent new words. It will make you understand the meaning of new words as and when you encounter it.

If this article is able to help you, do share it with your friends and classmates to help them easily read Shakespeare. Help me to make this article better by sending your feedback in the comment section and letting me know about the mistakes and improvement scopes. Have I missed to mention your favourite Shakespeare Phrase, do let me know.