I will speak daggers to her but use none 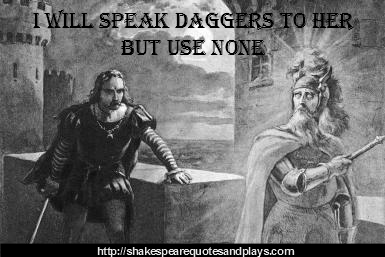 This speech “I will speak daggers to her but use none” was used in Shakespeare Play, Hamlet, ACT III, Scene II. Hamlet was angry on his mother, because of her decision to marry his uncle. She married her before the mourning period of her husband’s death was over. This made hamlet, extremely  furious, and he decided to kill his mother by words and not with daggers. Killing with words here stands for using harsh words. You may use “I will speak daggers, but use none”, when you want to achieve your end with words without using any weapon.