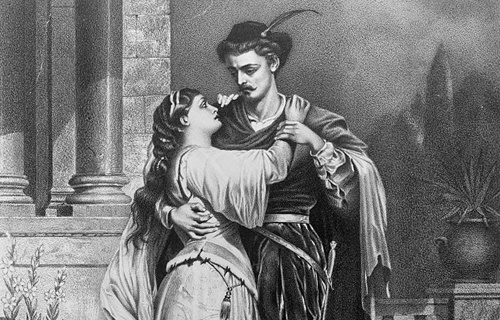 The Romeo and Juliet summary will rightly project the entire theme and events of the various acts to provide a student a thorough understanding of the play in relation to its poetic literary devices.

As the very epitome of a romantic tragedy that personifies the all-encompassing theme of tragic love between two young lovers, Romeo and Juliet is perhaps Shakespeare’s most loved and popular play. The very first lines of the prologue sum up the content of the play set against the bitter feud between the houses of Montague and Capulet in the city of Verona Italy.  The prologue written as a sonnet is full of imagery and metaphors such as death marked love which insinuates how death has overshadowed the love of the two main protagonists Romeo Montague and Juliet Capulet from the very beginning.

As Shakespeare rightly claims in another metaphor, their star-crossed paths become their death warrant.

Romeo and Juliet summary Act I

The first scene itself opens onto a fight between servants of the families which is subsequently joined by Romeo’s cousin Benvolio and Tybalt, cousin to Juliet. The fight angers Escalus the reigning Prince of Verona who imposes a [sociallocker id=261]death penalty on the two families if future fighting breaks out.

Meanwhile Romeo is lovesick due to the unresponsive Rosaline who does not requite his love. Benevolio urges him to forget her and contemplate other women.  Lord Capulet hopes that Juliet will marry a nobleman Paris and plans to throw a party to that effect. When Benvolio learns of the plans, he urges Romeo to go to the occasion in disguise in hopes that when Romeo sees Juliet he will forget Rosaline. His wishes are rightly explained through the foreshadowing statement.”Take thou some new infection to thy eye, / and the rank poison of the old will die” (I ii 49-50).[/sociallocker]